Chinese characters: from brain to paper

I'll take this opportunity in my first post to say hello - I'm George, a newbie learner, with a specific difficulty that I've encountered in my first few months of learning Chinese:

I have been doing very well in my reading and interpreting of the characters, but I find it very difficult to perform the opposite action, where I generate a novel phrase in my head and want to put it into characters. I won't necessarily have a difficult time thinking of what to say or how to say it, but instead I'll be thinking "I want to say 'shen2me', now how do I write it?" Generating both the image of the character of my head and translating it to strokes on the page is where I have a lot of difficulty.

Currently, I use flashcards that I've made to learn to recognize the characters, and to perform the opposite action I'll flip the cards over, see the pinyin and the meaning of the character I want to write, and then try and write it, but it's been the 'rate-limiting step' if you well of my chinese learning.

Hopefully I'm not repeating too much of what has been proposed in this group, but does anybody have any good techniques for this? Thanks in advance-

When I was done with that, I would make my own sentences to try and make sense of what I just learned. This was also a way to recall previously learned characters.

Skritter is a website where you can write characters with your mouse, or writing tablet and it helps you learn, but they charge a fee.  There's also a book called Remembering the Simplified (or Traditional) Hanzi where they teach you how to remember characters by using mneumonic devices, but I find that a long list of characters without context bores me, even though I do remember a lot from that book.

Lastly, write every chance you get. If you're waiting in line for something, or during TV commercials, just write write write, even if it's the same character, 20 times. You can never write enough. 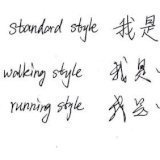 Chinese characters are so different from English, Spanish, Italian, etc. that it is really super rewarding to me to read, recognize, and write them correctly. Figuring out the left-right, up-down written order and trying to make my characters legible quickly is my current challenge. I like using Skritter and think it helps me learn well. Another site, RememberIt uses flashcards, but I think is way overpriced for what it provides. ChinesePod's learning resources are superior. I'm really happy to have it as a learning resource!

I'm in two minds about this one.  On the one hand, I do want to ultimately be able to handwrite Hanzi but on the other hand I do question why I'd ever need to.  When writing Hanzi I've only ever had a need to do it on a computer (come to think of it, I very very rarely these days ever even handwrite english!).  When typing Hanzi, you obviously use the pinyin and as long as you have a rough image in your mind's eye of what the characters should look like, then you can normally pretty easily select the appropriate pop-up.  And even then, if all you know is the pinyin and no clue what the character should look like, then you can always mouse-over to get the translations before you input the correct characters.

My preference is to just focus on the reading, speaking, listening and electronic-typing and only once I'm happy I'm as fluent as I'm going to get in those disciplines will I then approach handwriting.  (to be honest, even if you just focus on these disciplines you'll find you can remember how to handwrite a sigt number of characters without even thinking about it).

"to be honest, even if you just focus on these disciplines you'll find you can remember how to handwrite a sigt number of characters without even thinking about it"

This is true. I found that when my speaking and listening comprehension got better, my reading got faster, and I somehow kind of remember how to write them better. Maybe it has something to do with the fact that written language usually conforms to a spoken language? who knows?

I hadn't thought about your 'when will I use it' point before. I can see that. This is how US Peace Corps trainers taught our team Russian when I was a volunteer in Uzbekistan. I developed a solid Uzbek and Russian vocabulary this way. I never wrote either language except at the bank or for taking class roll. I think writing in Chinese helps me connect with the language. Pinyin is really helpful to me to get the accents down. The accenting is a completely new facet of language learning to me.

yep, I'm pretty happy using Chinesepod too. Their dialogues let you see words in context which is really important when learning a foreign language.

I had to hand write things in Chinese on the board when I was an English teacher in China, or when I had to leave a note for someone.  Not to mention when I took my tests in Chinese class everything was handwritten and no pinyin was allowed.

Well if repetition is the key, that's certainly what I've been doing. I guess it's hard because in a language where everything is in it's own 'pinyin' if you will. But it's a smart idea to just write in little spaces during your day, so thanks for that suggestion bweedin. I also haven't really been writing my own phrases, although I've been doing that with speaking as I mutter things to myself in chinese.

Even when you write in English you don't really think about it. Just try writing and not cross your "T"s and not dot your "I"s to see what I mean. With certain Chinese characters that you know really well, if you try to slow down to show someone how to write it and show each stroke, you often have to think hard, because at one point your hand muscles just remember where to go. Of course it helps a lot to learn the radicals or components of each character, but repetition helps with the muscle memory.

That's why for me, I first studied traditional characters and I'm trying to switch to simplified, but it's not as easy as I thought because my hand is already used to writing traditional.

Of course like with anything, if you don't use it you lose it, and you will forget.

Have you tried Anki? It's "smart" flashcards using spatial recongnition technologies to make memorizing words easier and more efficient. It gives you words depending on how well you have remembered them. Many of our users use it to help them learn words and charatcers. Go here to export your saved ChinesePod vocabulary to Anki.